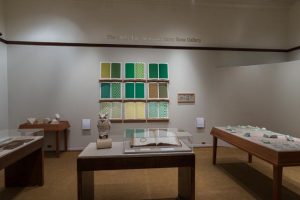 Over one month has passed since the opening of Common Touch on April 4, 2016. Since that day a few hundred visitors have experienced the multi-sensory exhibition and complementary programming. Jayne’s installations have transformed the Library’s gallery into a tactile world where looking is an embodied act. Abstract forms, geometric shapes, and first person constructions infused into works in hues of blues, green, yellows, and maroons entice visitors to engage with pieces inspired and representing teaching tools used in the historical education of the blind.

Within the transformed gallery, sighted visitors are struck by Gift #4[1], a series of nine silkscreen printed patterns depicting a visual transmutation of the noted 1880 composition March Timpani by African American blind musician Thomas “Blind Tom” Wiggins on the east wall. Nearby, Gift #5 a topographic map with a key of porcelain geometric forms and embroidered grid symbolizing the travels of the prominent 18th-century English blind surveyor John Metcalf encourages visitors to feel its multiple tactile elements. Jaynes further facilitates the perceptual exploration of these men’s lives in Gift #6, an olfactory mechanism that immerses visitors into a cocoon of sound and scent conveying micro-narratives of the lives of Metcalfe and Wiggins. This is just a small portion of the sensory world Jaynes created to challenge our “ways of knowing.”

In tandem with Common Touch’s opening, there has been a flurry of tours, programs, and receptions over the last few weeks. The packed opening reception on April 5 was soon followed by a visit from students from Haverford College’s Hurford Center Dialogues on Art program. On April 18, Common Touch partner Art-Reach held their Philadelphia Cultural Accessibility Peer Group (PCAP) meeting at the Library. The panel discussion featured artists and art advocates, including Jaynes, and the work being done to create more accessible programs in cultural institutions. On April 20, Terry Galloway gave a stirring and intimate performance of her one-woman show You Are My Sunshine at the Gershman Y about her experiences with a cochlear implant. And on April 26, project partner Philly Touch Tours hosted a tour of the exhibition for attendees of the Accessible World Conference (April 27-28).

In the next few weeks Jaynes will speak about her artistic process (May 17) and award-winning writer Stephen Kuusisto, author of the New York Times “Notable Book” Planet of the Blind (1998) will discuss blind history and its place in art (May 24). [link to event page]

We could not have asked for a more auspicious start to the run of Common Touch.

[1] Jaynes’s work are named in homage of the education materials – Gifts –  designed by Frederich Froebel (1782-1852), the founder of Kindergarten.

Who is Dorrie Rush