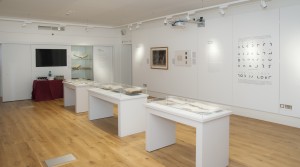 In 2013, I curated an exhibition at Birkbeck’s Peltz Gallery in London, which explored the historical development of raised print formats for blind people. Touching the Book: Embossed Literature for Blind People in the Nineteenth Century considered both the technological advancements as well as the social and cultural debates that marked the rapid proliferation of raised alphabetic systems in Victorian Britain before the adoption of Braille. Supported by a sharing heritage grant from the Heritage Lottery Fund, the exhibition brought together around thirty objects, including important examples of early embossed literature (such as classbooks, Bibles, spiritual guides and fictional works), alongside writing apparatuses and textual and visual accounts of visually-impaired people reading. Artifacts were borrowed from the Wellcome, Royal National Institute for Blind People (RNIB) and private collections. The exhibition was inspired by research I’d undertaken as a PhD student in Victorian literature at Birkbeck, and which I’d continued to work on as a postdoctoral fellow. Its scope was also developed in light of my experience working in various curatorial roles, including at the National Portrait Gallery in London.

More information about the exhibition can be found on its website. In this post, I want to reflect on some of the challenges that I faced as a curator (with a modest budget) in producing an exhibition exploring the heritage of blindness.

Touching the Book detailed the tension that existed between early embossed systems, which were characterized either by adherence to the Roman alphabet (and thus legible to the eye), or by their use of an “arbitrary” alphabetic code, adopted from say phonetics, or, more familiarly for us today, a dotted system like Braille. Different approaches are illustrated here with a sample shown of a script based on the Roman alphabet, known after its inventor as Alston type, and an arbitrary script based on shorthand principles, known as Lucas type, again after its inventor. [Fig. 1 & 2]

A Peep into the Menagerie of Birds, Embossed for the Use of the Blind (Glasgow: Printed by John Alston, 1842). Book, Alston type. 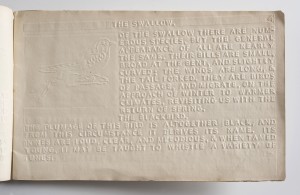 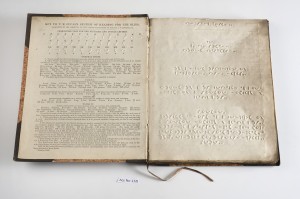 Frequently, sighted educators and inventors expressed unease about blind people using systems different to the Roman letter, even though arbitrary form offered better legibility to the finger, through more tangibly distinct shapes, and the use of contracted words and phrases. Whilst educators cited practical reasons (there would be less teachers to train pupils), some commentators also recognized more troubling incentives for sticking to a visual design; the ‘selfish feeling of not wishing the blind to have the power of writing in characters unknown to themselves’.[1]

Increasingly, blind people became more involved in debates concerning tactile literacy. Indeed, it was such a pressing issue that it precipitated one of the first organized movements of blind people in Britain, with the establishment of the British and Foreign Society for Improving the Embossed Literature of the Blind in 1868, led by Thomas Rhodes Armitage.[2] In 1870, after interviewing many blind people, the group detailed the advantages of the dotted systems being used throughout America and Europe, and endorsed Braille. This was on the basis that Braille was both the easiest system to learn and, crucially, allowed for the cheapest and simplest writing frame and mathematical and musical notation. The exhibition contained both examples of early Parisian Braille from the 1860s, as well as Thomas Rhodes Armitage’s writing frame and a volume of his journal.

In many ways then, the central story of the exhibition was the relationship between disability and access to cultural form. I wanted to show how, despite the narratives of progress that raised print inventors liked to proclaim, reading material had been made effectively inaccessible to nineteenth-century blind communities through an over-privileging of visual design. I also wanted to convey the importance blind people themselves placed on their own tactile and sensory experience in determining the best format literature should take for readers and writers who didn’t rely on sight. So the exhibition set out to challenge a sensory hierarchy which had valorized vision as the primary mode through which literature might be enjoyed.

However, the artifacts through which this story was told presented particular display challenges, and I was very conscious as a curator that their display might reinforce a visual framework around these objects. This was not insignificant as the embossed books in particular have a unique and arresting visual appeal, exciting designers and book historians who visited the exhibition.

The exhibition space itself consisted of four display cabinets, with a number of items framed on the wall, as this installation shot shows. [Fig. 3]

Whilst I very much wanted touch to be a key part of the exhibition, the objects had to be behind glass, due to both security and conservation considerations.

The artifacts were largely rare books that had been produced using experimental printing technologies, and although ostensibly they were intended for handling, the early methods for embossing letters had made the paper brittle. As such, the books have been particularly prone to damage, and their condition showed signs of wear and tear over the years: the surface of pages crumbling, the threads and bindings coming loose, in places the embossed lettering worn down. How then to present these objects to visitors who were partially-sighted or blind and to whom visual interpretation of objects and information material might be less useful than other modes; and how to impress a sense of their tactile qualities to all visitors?

With the available budget I produced, with RNIB image services, relief replicas of several of the alphabets and books for handling within the exhibition. These were not exact replicas: the fonts were enlarged for tactile legibility (giving some sense of the challenges Victorian finger readers might have faced grappling with

some raised scripts in their original format). Braille notes were also added to aid interpretation. For example, if an embossed alphabet code in the original Victorian book had been accompanied with a Roman letter character as a key, we also supplemented that with a Braille character. The booklet also featured full object descriptions of those select replica items. Whilst all the information labels were reproduced in a Braille handbook, budget constraints meant that we could not afford to reproduce object descriptions for all items in Braille, nor produce audio guides. Instead, we uploaded full object descriptions and caption information onto the exhibition website as both a word document; and on the individual pages which were created for each object, accompanied also by a photograph. For low vision users, we also made available within the exhibition space enlarged copies of photographic reproductions of each object, as well as magnifiers.

Whilst an audio guide wasn’t available, I ran a series of talks with groups of blind and low-vision visitors throughout the duration of the exhibition. If this programming aspect sprang from a technological lack, it was also for me one of the most exciting and dynamic legacies of the show, as each visitor brought various and diverse interests, experiences and insights to the historical material. I was able to spend time describing objects and images of particular interest to individual visitors and together, in response to prompts and queries, visitors and I would frequently find new details or meanings that – despite spending many years working on this material – I hadn’t noticed before. With smaller groups, there was also opportunity to handle some of the more robust artifacts from RNIB collections; a copy of a Bible in an arbitrary script called Frere, and Armitage’s writing frame. Getting a sense of the size and shape of the books, the density and feel of paper, and some of the conventions used for finger reading (such as the hook that Frere introduced at the end of a line to guide readers to the line below, which was then read in reverse in a snake-like motion), helped to bring the material alive for visitors, and opened up new paths of questioning.

Exploring Victorian tactile books highlights the diverse ways in which blind and partially-sighted people engaged with literary material in this period, and impresses the multisensory nature of all acts of reading. Yet this history also embodies sets of prejudices, power dynamics and competing interests which hindered the community it was supposed to serve from easily accessing the written word. Following the exhibition, I’ve run several workshops on this heritage at conferences and humanities festivals. These are events I’ve particularly valued as they allow opportunity for more ‘hands-on’ engagement with the material. For example, being able to compare the scale of Alston type – one of the most popular early formats – as it was produced, alongside the replicas we had made – encouraged discussion around the difficulties Victorian finger readers may have faced, and the interests and agendas that may have motivated inventors. It’s a history which encourages us to think and talk about the ways in which our own rapidly shifting media age might also re-inscribe barriers to access.

[1]George A. Hughes, An explanation of the Embossed Systems, adopted in the United Kingdom for educating the Blind; including music, thorough bass and musical writing for the sightless (London: 1848), p. 4. Hughes, who was blind, invented his own arbitrary raised script in the 1840s, although it was never extensively used.

[2] For a contemporary account, see an article published in the journal edited by Charles Dickens, ‘Blind Leaders of the Blind’, All the Year Round, May 7, 1870 (pp. 550-52). Available on the Dickens Journal Online website: http://www.djo.org.uk/all-the-year-round/volume-iii-new-series/page-550.html.

A Vision Council
Scroll to top