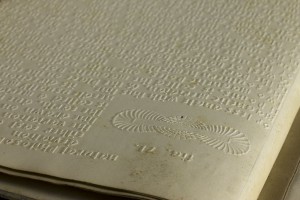 This picture shows an up-close, detailed portion of a tactile page in upside-down orientation to the viewer. In the upper left corner of the page, the viewer’s lower right, is a small, detailed, raised symbol labeled “fig. 71.”. The symbol is made of three ovals overlapping side by side with a thin, horizontal rectangle running through the middle of all three. The middle oval is made from many thin, concentric ovals. The two side ovals are made from lines that radiate out from the edges of the rectangle, like veins radiating out from the center of a leaf to its edges. The page is mostly composed of text, most of which extends beyond the picture’s frame and is semi-illegible in its upside-down orientation. A few partial lines are discernible: “natural philosop-,” “deviation,” “either east o-,” “the variation,” “line drawn on,” “the earth, due,” and “is called a meri-”. The paper is off-white, with small brown stains and smudges. [End of description]