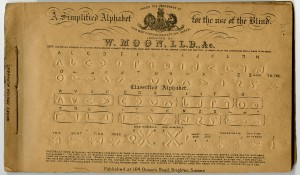 Picture shows cover page to William Moon’s “A Simplified Alphabet for the Use of the Blind” (Brighton, 1893?). On the top of the page is the title. Between the words “Alphabet” and “for” is the royal seal captioned “Under the Patronage of Her Most Gracious Majesty The Queen.” Seal includes images of a lion and a unicorn. Beneath it reads “Invented by William Moon, L.L.D., &c. Note: The Dotted Marks of the Letters Printed Over the Alphabet for the Blind, Show What Portions of the Common Letter are Omitted, in Order to Lay the Characters Open & Clear To The Touch.” Next line printed in Moon type for the letters A-N with the next line down printed in Moon type for the letters O-Z as well as for the symbol “&” and “Th” for “The.” In the middle of the page is the caption “Classified Alphabet.” Beneath it is a line of letters in Moon type grouped into four sets with the next line also in four sets of letters in Moon type. Next line printed in Moon type for contractions, numerals, and punctuation, including “ING,” ‘MENT,” “TION,” “NESS,” “2,4,6,8,3,5,9” “Short Stop,” ‘Full Stop,” “Parenthesis,” “Division of Verses,” and “!” Printed text identifies each Moon type character. Bottom of page reads: “Instructions: In Teaching the Alphabet, Care Should be Taken to Explain the Alterations Made in the Letters, as Indicated by the Dotted Lines, (See The Note Above The Alphabet). The First Line of Reading is Read from Left to Right, and the Second from Right to Left to Prevent the Reader Losing his Place; The Brackets Guide the Finger from Line to Line. Words Ending in Ing, Ment, Tion, and Ness Have the Last Letter Put for the Whole Syllable, Also for Ing, T for Ment, &c. The Dots One Above the Other Giving Notice of The Contraction. The First Letters of Lord, God, Jesus, and Christ, Always Stand for Those Holy Names. Two Dots Side By Side, are Used for A Full Stop, A Single Dot for Any Shorter Stop. Verses are Divided by Two Short Lines One Above the Other. [Picture of a dot over a line] Stands For TH & THE. “Moon’s English Alphabet” printed vertically on left edge of page. Bottom of page reads “Published at 104, Queen’s Road, Brighton, Sussex.” [End of description]