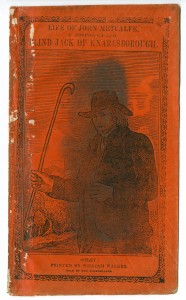 Sketch for the enclosure for the olfactometer, 2015. 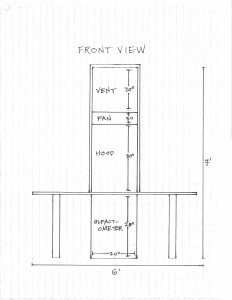 As the one year mark has come and gone for Common Touch, time seems to have flown by as the April 4, 2016 opening date for the exhibition fast approaches. Teresa Jaynes’s art works are beginning to be realized after months of research at the Library Company, New York Institute for Special Education, and Perkins Institution. Sketches, drawings, and prototypes are being transformed into a tactile map with a three-dimensional key showing the travels of the 19th-century English blind surveyor John Metcalfe; laser-cut wooden letters after the penmanship of the previously blogged about Jenny Partridge; and an olfactometer that will immerse visitors into a cocoon of sound and scent relaying a micro-narrative of the life of Victorian blind musician Thomas Greene Bethune. Wall art, tactile facsimiles, and geometric sculptures will also be discovered in the exhibition conceived around the themes of orientation and perception. Jaynes’s multi-sensory installations will also invite exhibition patrons to explore the nature of various dichotomies, including interior and exterior; public and private; masculine and feminine; and the sighted and the unsighted.

On Art and Life

Race, Celebrity, and Disability in the Collections
Scroll to top