Race, Celebrity, and Disability in the Collections 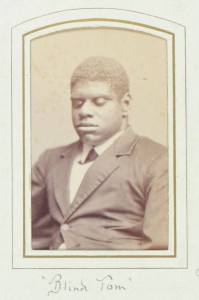 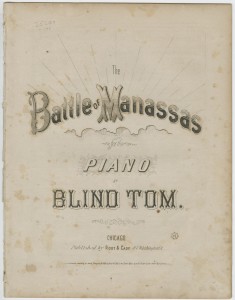 Earlier in the year an auction of ephemera documenting the career of Blind Tom, one of the major musical celebrities of the 19th century, was held. Few today know his stage name, but the life and career of Thomas Greene Bethune, later Wiggins, exemplifies the complexities to be found in exploring the intersection of race, celebrity, and disability in our country’s history. Although not a bidder in the auction, the Library Company does hold material that speaks to the work and public image of Wiggins.

Born a slave and blind in Georgia in1849, Wiggins was a musical genius who has been posthumously diagnosed by a recent biographer as likely having autism and savant syndrome. Able to learn piano compositions through sound alone, Wiggins was performing to sold-out crowds by age six and licensed by his master James N. Bethune to the traveling showman Oliver Perry by age eight. For several years following, Wiggins perpetually toured the country, as well as Europe. By the 1860s, he was the first African American performer to officially play at the White House and had earned hundreds of thousands of dollars for Perry and the Bethune family. Profit-generating publicity included mass-circulated photographs like this carte de visite. Collectibles, the images were often placed in celebrity photograph albums by their contemporary consumers.

Although promoted as a musical prodigy, Wiggins was also often patronizingly described in written accounts more as a musical mimic rather than a composer. Wiggins did, however, create his own compositions, including his most popular, The Battle of Manassas: For the Piano originally published in 1862. The Library owns an 1866 edition of the sheet music. Accompanied by notes explaining its creation, the work sheds light on Wiggins’s methods in the composition of his music, which was often based on the sounds in which he was immersed daily. For Battle, after hearing newspaper accounts of the skirmish, he chose to “represent the eve of the battle by a very soft sweet melody, then the clatter of arms and accoutrements, the war trumpet of Beauregard, which you will hear distinctly…” Although the piece was promoted by his then manager Perry as written in support of the South, recent biographer Deirdre O’Connell, given audience accounts, conjectures that the stirring discordance, the “harum scarum” sound of the piece evoked the tragedy of war for the listeners as opposed to serving as a “patriotic rouser.”

Throughout his life, Wiggins remained under the “care” of the family that owned him since before the Civil War. Rarely performing in public after the late 1880s, Wiggins died in 1908 as a ward of the ex-wife of John Bethune, the son of his original master James N. Bethune.

When Wiggins performed in the White House in 1860, he did so in an era when he was described in terms of being owned and exhibited and as possessing the physique and manners of an animal. These exaggerated descriptions were a result of his race, blindness, and autism. Although this sheet music and photograph confirm Blind Tom as a cultural icon of his time, they are also reminders of the visual justifications that led to his social and economic marginalization.

BlindTom.org. A further description of  and to hear the composition of The Battle of Manassas.

Amy Vidali, “Seeing What We Know: Disability and Theories of Metaphor” in Journal of Literary & Cultural Disability Studies 4 (2010), 45.

Seeing the Elephant
Scroll to top