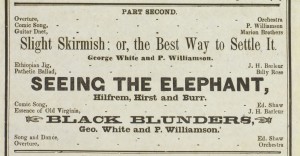 In my research for Common Touch, I have become more dutifully aware of the use of the word to “see” or “seeing” in our spoken and written language, particularly in terms of visual culture. Visual culture, disability studies, and literary scholars like Georgina Kleege and Julia Miele Rodas have explored the use and power of the word in our cultural history and in our lives today. As Rodas has noted, the sighted and those who are visually impaired are “acculturated into the same language.” It is hard, and in many cases nonsensical, to avoid sight-connoting signs like “to see” to describe non-visual experiences. (This post certainly contains them).

Consequently, a few months into the Common Touch project, I decided to do a title search in our catalog for the keyword “seeing.” And among the titles, I noticed this playbill. Within the promotional text, “Seeing the Elephant,” was highlighted. Upon further reading, I became aware that this was not an elephant act, but a minstrel production. And with further research, I realized the title came from a euphemism used during the 19th and early 20th centuries – one with a multi-layered history and origin.

“Seeing the elephant” appears to have first begun to be used as a euphemism in the mid-19th-century. It was applied to moments of either overwhelming excitement or dread, and was often documented in the lexicon of American pioneers describing their harrowing journeys westward. By the time of this playbill, the phrase had been co-opted to refer to Civil War soldiers’ horrific experiences on the battlefield. And, in turn, used as a referential title for a minstrel production during the war.

As I learned about the anecdotal history of “seeing the elephant,” given my internal musings about the word “seeing,” particularly in regard to the theme of “ways of knowing,” I found it ironic. In our visually-centric world, we who are not visually impaired often cling to “seeing is believing.” Yet, for a while, in our cultural heritage, our “seeing” something, an elephant, turned this notion on its head. Seeing was unbelieving in this instance. The individual experiencing the moment could not or did not want to believe what he was seeing. In the words of Kleege, “Human experience is not based on sight alone.”

Race, Celebrity, and Disability in the Collections