The Pennsylvania Institution for the Instruction of the Blind Printers: Kneass and the Sniders.

The Students’ Magazine. Philadelphia: Pennsylvania Institution for the Instruction of the Blind, 1838. 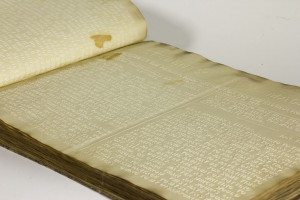 Printing for the blind had been associated with the Pennsylvania Institution for the Instruction of the Blind (PIIB) since soon after its founding in 1832. Reading with the fingers was central to the educational mission of the school. Consequently, the institution actively pursued producing tactile texts. Napoleon Bonaparte Kneass, Jr. (1844-1898), son of Civil War Colonel Napoleon B. Kneass (1818-1888), was the last and the only blind printer for the Institution. Born in New Orleans when his father was in the mercantile trade, Kneass reportedly lost his sight from sun stroke at the age of seven. A pupil at PIIB by 1855, Kneass maintained a relationship with the school the rest of his life as a manager, a member of the household committee, an officer of the house, and most notably as a printer for the blind.

Although PIIB maintained an onsite printing establishment from about 1838, the press proved a dubious endeavor for the school. Previous to Kneass, relatives Jacob and Michael Snider  oversaw the printing for the school. Jacob Snider, Jr.  (1811-1866), a mechanical engineer by trade, served as the school’s printer and/or oversaw its printing establishment from about 1833 until about 1840. His efforts led to the first successfully raised-print letter text in the United States in 1833. The PIIB administration hailed the Gospel According to Saint Mark as “a style of unequal typography for the sightless.” They had high hopes it would be the first of many texts issued by the school to help educate, in mind and spirit, their students, as well as those worldwide. Under Jacob Snider’s tenure and with Michael Snider (ca. 1795-1852) listed as printer, the school issued The Students’ Magazine 1838-1845. The first periodical for the blind printed in raised letters, it contained original compositions by the pupils that conveyed “anecdotes illustrative of their habits and modes of thinking.”

Michael Snider continued Jacob’s work and managed the school’s printing department beginning about 1840 and continuing until his death in 1852. By then, Roman letters in all capitals, known as Philadelphia Line, became the printing method of choice at PIIB. Michael Snider improved the design originated by Jacob Snider and the school’s founder Julius Friedlander (1803-1839). Following Michael Snider’s death, printing continued at the school. The three-volume, raised-print Dictionary of the English Language (1860), the first of its kind, proved the most significant publication. Author and principal to the school at the time William Chapin touted it as “one of the most valuable contributions to the tangible literature of the blind.” Published at a cost of over $2500 and with high expectations of large sales, the dictionary initially proved a failure. Less than one-third of the 250 copies printed had sold by the end of the 1860s.

The high cost of production, low sales, and lack of a universally accepted system of printing for the blind, often led to periods without printing by the school. By the mid 1860s, printing initiatives had been discontinued with a volume of poetry the last work produced on site in 1864. 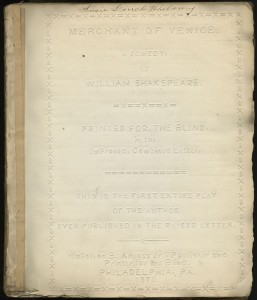 Despite these impediments, printing did continue in association with the school. N. B. Kneass assumed the role of off-site printer in 1867. Soon thereafter he developed the “combined letter” system comprised of capitals in Roman letters and the lower case in the angular style of Boston Line. PIIB continually advocated for the system in their annual reports. In the vein of the Student’s Magazine, the printer initiated Kneass’s Philadelphia Magazine for the Blind in 1868. In 1870 he published Shakespeare’s Merchant of Venice, the “First Entire Play of the Author ever Published in the Raised Letter.” Kneass also wrote the entry “Printing for the Blind” in Luther Ringwalt’s American Encyclopaedia of Printing in 1871. His entry discussed the history of raised printing in Europe and the United States and the need for a uniform system, which most practically should be his combined letter, a system he described as one . both the sighted and blind could “read.”

During the final decades of the 19th century, the administration at PIIB continued to report about the state of printing for the blind. The American Printing House in Louisville, KY and the Perkins Institute for the Blind in Boston had assumed the printing of most textual resources used by the school. However, the name of a printer long associated with the school was still to be found among their texts – Kneass’s Philadelphia Magazine for the Blind, which remained in publication until the 1890s.

Pennsylvania Institution for the Instruction of the Blind, Annual Reports, 1833-1885

“Pennsylvania Institution for the Instruction of the Blind. Michael Snider,” Philadelphia Inquirer, February 26, 1852.

Visual Record of the Pennsylvania Institution for the Instruction of the Bl...

Who is Dorrie Rush
Scroll to top