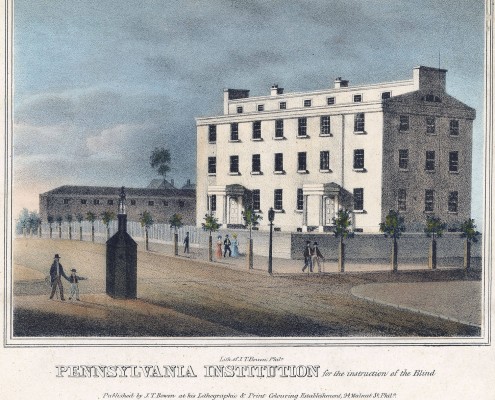 When the Pennsylvania Institution for the Instruction of the Blind opened in 1833, it was one of the earliest educational institutes for the visually impaired established in the United States. The school taught courses in the humanities, math and sciences, and music, as well provided instruction in handicraft employments. Still in existence today as the Overbrook School for the Blind, the school inhabited two primary buildings over its long history. The first located at Race and Twentieth Streets in Center City and the second (and current) at 6333 Malvern Street in West Philadelphia. In addition to raised-printed materials produced by and for the Pennsylvania Institution for the Instruction of the Blind, the Library Company holds views documenting the buildings of the educational institution from its first years of existence through the 20th century. The images were issued in a variety of mediums and contexts, but all indicate the importance of the school as a prominent landmark in the city of Philadelphia. 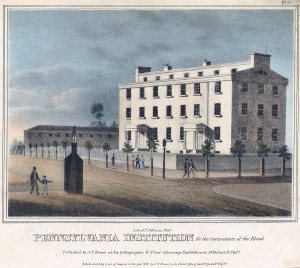 Issued as plate 12 in the series Views of Philadelphia, and Its Vicinity, this print depicts the school at the northwest corner of Race and Twentieth Streets. The Institution first occupied this building in October 1836 after years of fundraising for a permanent, larger school building to accommodate their increasing number of students. Julius Friedlander (1802-1839), founder of the school served as principal during this time. With printer Jacob Snider, Friedlander perfected the raised type (all capital Roman letters known as Philadelphia-line) printed by the school for their texts before his untimely death in 1839. 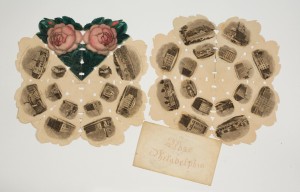 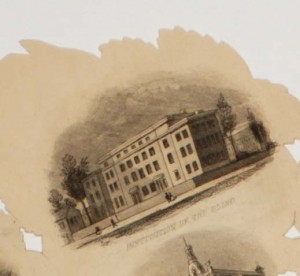 Illustrated die-cut prints shaped like roses were a popular souvenir novelty in the mid-19th century. The subject matter of the illustrations depicted often focused on prominent city landmarks of cultural and historical significance. This rose includes a vignette view of the “Institution of the Blind” when in operation for over twenty-five years. A few years earlier, in 1851, the school was enlarged with the erection of two wings, an elevation of another story, and additions, including to the workshop. Nearly 150 students, its highest enrollment since opening, were educated at the Institution during this period

A form of parlor entertainment and an extremely popular medium of mass produced photography, stereographs created a three-dimensional image when viewed with a stereoviewer. Most every middle-class class home owned stereographs and a viewer by the later 19th century. This stereograph from about 1869 shows the school at the end of a decade in which another story was added to the main section of the building as well a two-storied extension to the workshops. The era also saw an increase in the types of handicrafts offered as part of the Institution’s curriculum. The students’ wares were sold through a store operated by the Institution since the early 1840s. 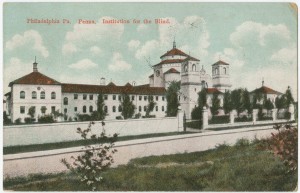 Postcards were at the height of their popularity in the early 20th century when this card showing the Institution was issued. A collectible and a means to quickly communicate with friends and family, postcards from this time often depicted city views. This one shows the school following its relocation from Twentieth and Race Streets to West Philadelphia between 1899 and 1901. Built after the designs of Philadelphia firm Cope & Stewardson, the new buildings, including quadrangles, were more conducive to the school’s new curriculum that included physical education and home economics. In 1946 the Pennsylvania Institution was formally re-named Overbrook School for the Blind.

Pennsylvania Institution for the Instruction of the Blind, Annual Reports, 1833-1865

Overbrook School for the Blind, Centennial Anniversary of the Building, 1999 http://www.obs.org/page.php?ITEM=107, accessed February 18, 2015

The Pennsylvania Institution for the Instruction of the Blind Printers: Kneass...
Scroll to top