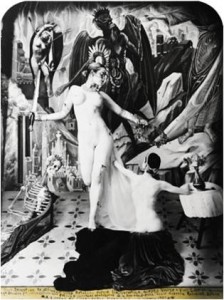 Picture depicts a composition inspired by folk-art devotional paintings known as retablo. Picture shows two nude female models, painted white to resemble sculpture, and staged on a pedestal covered in flowing drapery. To the viewer’s left stands a woman, her light colored hair pulled back into a low bun, her shoulders slightly pulled back and her arms stretched out from her sides. Her right leg is bent back and up toward her buttocks. She holds an upright sword in her right hand. She gazes down, to the viewer’s right, at a seated nude female figure with shortened arms and legs. Her back is to the viewer. Her dark wavy hair is pulled back into a low bun, and her left arm reaches to the standing figure. Her right arm rests on a small table covered with a white cloth. A vase of flowers adorns the table. The figures are in front of an elaborate backdrop. In the far left is a large nude photograph of the forward standing model. In the photo, she is standing with her left arm curved above her head and her right arm bowed down past her waist. Her right hand touches her inner left thigh. In the far right, next to the photograph, is a painted, shadowed, and winged form looking at a hand of salvation. A skeleton model lounges on the far left side of the scene. He is partially covered in drapery. He looks toward the women. The flooring extending from the front to the back of the scene is decorated with fleur-de-lis like details. Three lines of writing – the Retablo prayer – adorn the lower edge of the photograph on an attached yellow strip of paper. [end of description]