Common Touch is very pleased to host this guest blog post by Abby Glogower, Ph.D candidate in Visual and Cultural Studies at the University of Rochester. Her post represents a study of the intersection of disability studies and art possible with the collections at the Library Company. It is inspired by her dissertation research examining Philadelphia deaf artist Albert Newsam in the context of visual print culture and social knowledge in 19th-century America.

On Visual Eavesdropping and the White Noise of History: Albert Newsam and Deaf Culture in Nineteenth-Century America 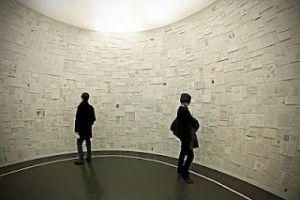 During the culminating work in a series called Conversations with Hearing People in 2001, Joseph Grigley’s installation White Noise (Fig. 1) invited visitors at the Whitney Museum of American Art into an oval-shaped room papered floor to ceiling with the traces of his daily conversations. These textual exchanges—jotted on napkins, scraps of paper or whatever writing surface happened to be at hand—are a necessity for any English “speaking” Deaf person. Instead of throwing away these bits of functional colloquy, Grigley, (who became deaf at age ten) began saving them into a massive archive of textual chatter. In the environment he constructed here, viewers entered a silent visual equivalent of a din, bombarded with the cacophonous hum of some two thousand conversations. The mosaic of fragments—which exist somewhere between writing and speech—turn the audience into visual eavesdroppers, privy to exchanges not intended for their eyes, devoid of context, and which would have, in oral form, been otherwise completely lost to history.

How well can we know these “speakers”? Is there anything historically significant about their ephemeral dialog? To Stephen Greenblatt, a prominent voice from the New Historicist school of critical theory, textual leftovers like Grigley’s have a great deal to tell us, even if they are hard to understand. “I began with the desire to speak with the dead,” Greenblatt stated famously, “for the dead had contrived to leave textual traces of themselves…many of the traces have little resonance, though every one, even the most trivial or tedious, contains some fragment of lost life.”[1] One of the gifts Deaf conversations with hearing people bestow to history then is a tangible archive of the kind of messy social static Greenblatt sought to enumerate: the subtle conditions of contingency that distinguish people and places in time. 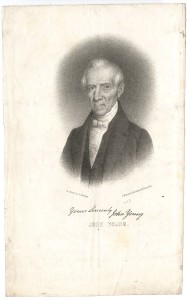 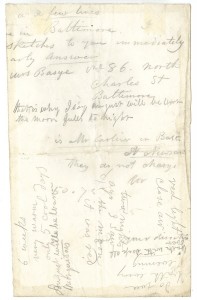 Thanks to another Deaf artist, one working in the nineteenth century, I have had the opportunity to visually eavesdrop on the past. Below is a conversation dating back to about 1845 going on, literally, behind Pennsylvania judge John Young’s back. No really, flip him over and you’ll see what I mean. [Figs. 2 and 3]

“Two nights ago I saw the moon—it was red.”

“Close air” is hardly any Philadelphian’s August wish. Then as now, the humid summer months brought a litany of annoyances:

“6 weeks very warm only 5 cool days. August will be warm—mosquitoes.”

“That is why I say August will be warm. The moon [is] full tonight.”

This is just one of several portrait prints at the Library Company whose versos function as writing slates. This is because their maker, lithographic printer and portrait specialist Albert Newsam (1809-1864) was deaf and mute and in a studio full of paper. Any misprints or remainders could be repurposed as sites of communication—both official and informal. [Fig. 4] I’ve spent a good deal of time with these disconnected quotidian murmurings, wishing I could assemble them into a coherent portrait of a man who left a vast body of representation of other people but very little about himself. It’s not easily done. Many of the topics are banal (In addition to the weather there is also some back and forth about personal hygiene. “Do you bathe every evening?” “Wash with soap allover.”). Moreover, the hybrid speech-writing nature of the exchanges is difficult to decipher. Unlike letters with specified authors, these voices scatter across the page in a way that probably made perfect sense during the actual conversation but defies clean, linear reconstruction after the fact. 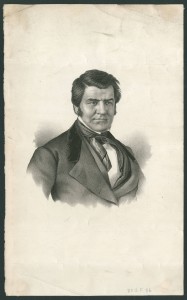 So what can we glean from trying to reconstruct them? We do gain some insight into the day-to-day operations of a busy mid-century lithographic portrait business (“When will these be ready for the press? Monday.” …“twas very unfortunate you did not state the full cost as once, what background did you bargain for?). But even more significantly we find evidence of something so obvious it is almost easy to miss: a skilled deaf professional working alongside and communicating with hearing colleagues. When Newsam began his career in the early 1820s, this was a new sight within the United States of America and really, the entire world. Albert Newsam was one of the earliest graduates of a new form of institution: the Deaf residential schools that began opening (first in the East Coast and later in the Midwest and South) between the 1810’s and 1850s and Enabled Deaf Americans to exit their isolation and neglect among the hearing. Here, living and learning alongside educators like Thomas Galluadet and Laurent Clerc, they began to forge Deaf identity and community and the standardized language of manual signs that would become American Sign Language.

Unfortunately, this era of thriving Deaf community formation and Deaf visual culture is not what most hearing people think of when they think of Deaf History. Instead, Alexander Graham Bell’s strident oralism more readily comes to mind. This pedagogical approach, which emphasized lip reading and verbal communication over signs and written communication—would come to dominate deaf education in the later decades of the nineteenth century and well into the twentieth, signaling the forcible integration of the Deaf into the hearing world on hearing terms. The opportunity to visually eavesdrop on the white noise gracing the versos of Albert Newsam’s prints reminds us that Deaf history was not always this way and moreover, that it could have unfolded differently; hardly an insignificant lesson to emerge from some scribbles about the weather.

In October 2014, a research grant from the Philadelphia Area Center for the History of Science enabled me to make a brief return research visit to the Library Company, where I was a researcher in Summer 2012. One afternoon, Prints and Photos Curator Sarah Weatherwax approached me and said that a scholar of Deaf history had just shown up and wanted to see some of the Albert Newsam materials. Would I be willing to share the items I had pulled with her, and if she was interested, anything I knew about them? I felt an initial twinge of that protectiveness academics get when fearful that someone else might be encroaching on their work, but my genuine fondness for and enthusiasm about my subject quickly won out. Sarah added “There’s one more thing,” “She’s deaf.” “Cool.” I said, hopefully readying some paper and a pencil. And that’s how I got to meet Kathleen Brockway, author of the recent book Baltimore’s Deaf Heritage. Kat and I spent the better part of an hour sifting through prints and letters together, chatting in the same manner enacted in the notes I had just been poring over from one hundred fifty years ago. I am grateful for all I learned from her and also the experience of our chance meeting. Our exchange lives on in my files, a modest contribution to the ongoing visual white noise of history.

A Gracious Contributor to “Common Touch”
Scroll to top